You must write in the name

in the space provided on the ballot.

A write-in vote for Terry is not a protest vote to be tossed aside. He is a registered candidate and a vote for Terry is a real vote that matters. It must be tallied the same way that party candidates are counted. You simply write his name in the space provided before you push that button. On the general election ballot in November, instead of filling in the box beside a partisan candidate's name, just fill in the "Write-in" candidate box and add the name Terry McIntosh.

Do not vote "Straight Party" if you want to chose individual candidates like Terry. A straight vote goes to every party nominee on the ballot in that party and nullifies other choices.

Ballots will vary from county to county depending on local elections, however all ballots will carry the same options for Federal Office. This is how you vote for Terry McIntosh. It is a valid vote that will be counted. 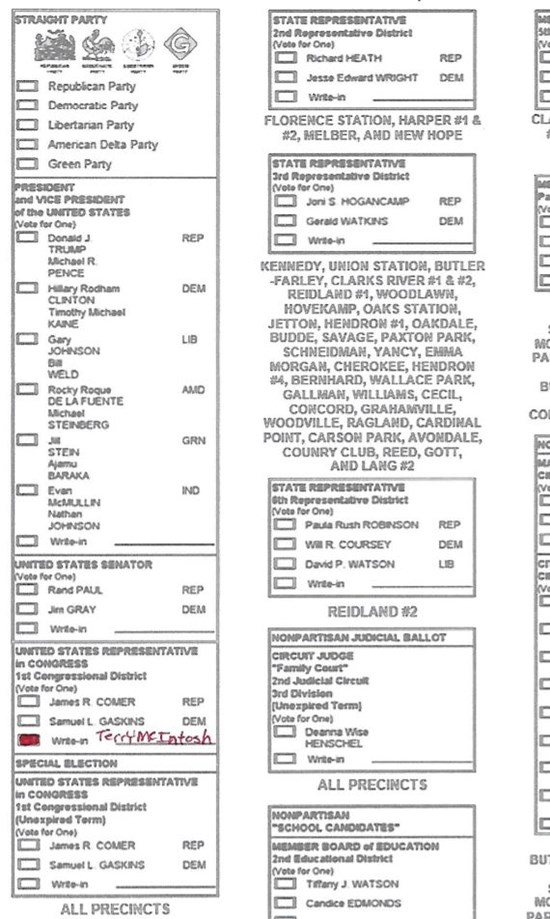 The special election category is to fill in the remainder of Mr. Whitfield's unexpired term which ends in January 2017. Terry is not eligible for the temporary job, but if you don't want either Mr. Comer or Mr. Gaskins to be in Congress for 4 months, you can always write in Terry's name as a protest vote or ignore the special election option altogether.

Be sure, however, to write in Terry's name in the first category for US Representative in Congress.

The general election will be held on November 8, 2016.

If you have not registered to vote, you can start the process online by clicking HERE.

You must register no later than October 10, 2016 to be eligible to vote.

Party Candidate names will appear on the ballot box, and normally, the voter will select which candidate he or she chooses. Do not vote party line or the party nominee will get your vote. Vote for each category individually. To vote for Terry McIntosh, you must write in his name in the space provided. It will not be on a party ballot and must be written or printed in the space provided that says "Write In."

If spelling of the name is wrong, it will still be counted for as long as it is obvious that it is a vote for Terry McIntosh.

You can write down his name before going to vote, or print off this image and take it with you to the designated precinct in your area.

Your voting booth should provide all you need to write in the name Terry McIntosh. If a pen is not provided, or if you need assistance, simply ask the monitor to provide you with one. They must comply. If they refuse for ANY reason notify authorities immediately.

Write in the name Terry McIntosh before you push that button!

To my Republican peers

Stop! Are you compromised?

SEN. MCCONNELL AND JAMES COMER DODGE TERRY MCINTOSH (AGAIN). WHAT ARE THEY AFRAID OF?